Back to Insights & Reports
What is driving gold and what does it mean for Australian equities?

It’s difficult to pinpoint any one factor responsible for the appreciation in the price of gold. Expanding central bank balance sheets, inflation concerns, geopolitical tension, or finite supply, there are many logical and valid explanations that assist in supporting the case for gold and its relevance.

Gold has been the major leading asset class in the 21st century having outperformed US treasuries, US equities, developed market equities, and emerging markets (after accounting for dividends). $100 invested at the turn of the century has grown to $591.

A large contributor has been falling real rates (the US Treasury yield less the expected rate of inflation). This was over 4% in 2000 and has recently turned negative. It comes with no surprise why gold is deemed more attractive when cash on deposit receives a negative real return. This is in comparison to the days when cash returned a 4% risk-free real rate.

It is possible gold is anticipating an uptick in inflation for 2021. It would make sense given central banks’ balance sheets are bloated with liquidity. QE historically has been mildly inflationary from a PCE perceptive as capital was mostly tied within the banking system. Hence why we have seen tier-one assets shoot to the moon, whilst non-discretionary consumption goods have remained relatively stable.

What we are seeing today is a surge in the money supply, which is being distributed to the real economy. Prices have fallen due to a shock in demand. The combination of closed businesses and high unemployment, much of which is hopefully temporary, has seen prices fall. However, as the world economy re-emerges, we could find ourselves facing a supply shock, with large amounts of capital chasing a diminished pool of goods. It’s fair to assume that gold has factored this in, to an extent.

Blowing up the balance sheet

Due to current economic conditions, the U.S. federal deficit is reaching unprecedented levels. Preliminary data suggests the federal deficit will be $4 trillion dollars this year, which is greater than 15% of GDP. Although, as the crisis unravels, it is likely these numbers will worsen. Throughout history, deficits of this magnitude have occurred only in the First and Second World Wars. 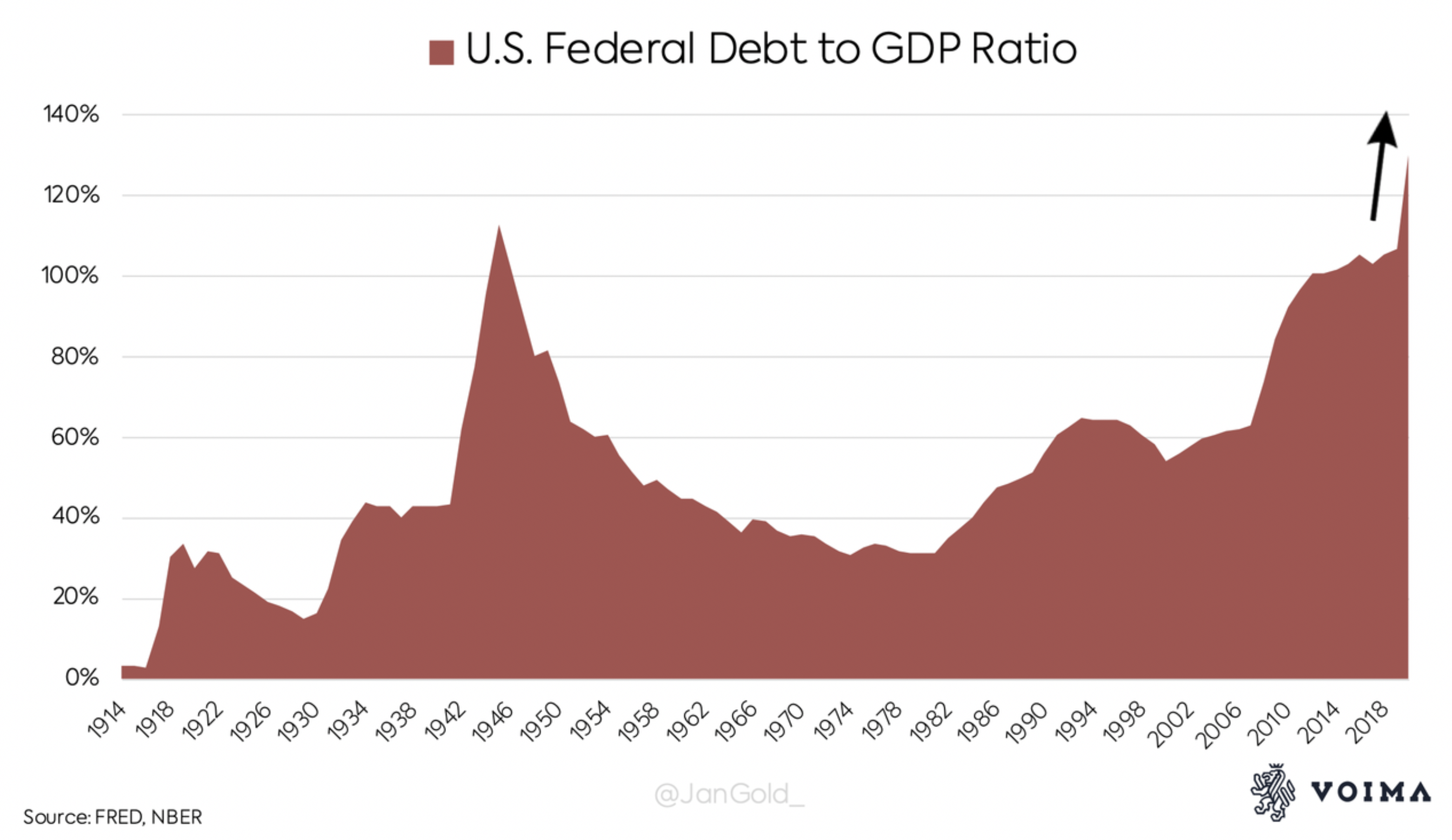 Gold collapsed from $850 to $250 under Greenspan’s “Great Moderation”. Greenspan was viewed as the “Maestro” until the dot-com bubble collapsed.

Gold went on a tear during the housing bubble, only to top when the ECB president Mario Draghi gave his famous speech: “We will do whatever it takes to save the Euro and believe me it will be enough.”

The debasement of FIAT currency

The future of the world is now in the hands of six central banks, Fed, ECB, BoE (England), PBOC (China), BoJ (Japan), SNB (Swiss). This in itself bodes unfavourably for the global financial system. For decades these central banks have arguably abused their power and taken control of the monetary system.

The central banks have potentially weakened the financial system by printing money and extending credit where investors refused. It is known that creating liquidity out of thin air gradually devalues currencies, potentially to the point where they become worthless amidst hyperinflation, as witnessed in Zimbabwe in 2008, Argentina in 1990, and Germany in 1923.

The balance sheets of the six banks mentioned have increased by $3 trillion, from $21 trillion at the end of February 2020, to $24T today (refer cumulative Bank Balance Sheets). This is almost two and a half times their peak during the GFC and a staggering six-fold increase in the last 15 years.

Gold (and silver) are potential winners if currency debasement accelerates. Hyperinflation, should it eventuate, could add many zeros to the gold price. However, this price would be meaningless since it would only reflect the debasement of currencies. Although, not meaningless to people who hold worthless dollars or euros. At this point, gold will once again prove its utility as a relative store of value.

Keeping in mind, hyperinflation does not arise as a result of demand-led increases in prices, but as a result of collapsing currencies. We could well see transpire as money printing accelerates. Zimbabwe and Argentina case in point, there is no reason why larger developed nations can’t follow this path.

Arguably, physical gold should not be seen as a speculative investment, but rather as the only store of wealth that has survived throughout history and maintained its purchasing power. Gold is insurance, and gold is wealth protection. 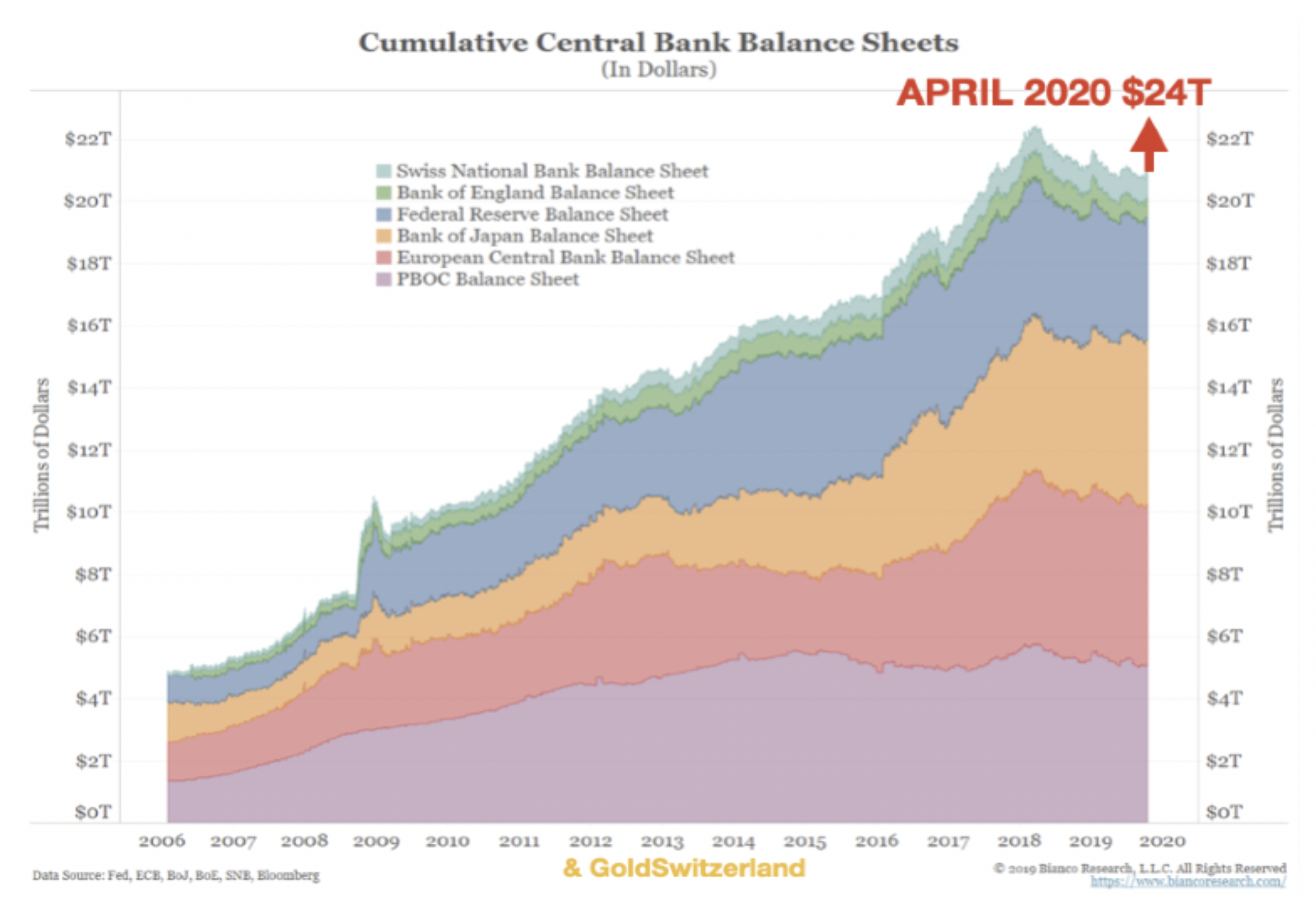 The case for central banks holding gold remains strong. Especially considering the economic uncertainty caused by the COVID-19. The WGC 2020 Central Bank Survey found that 20% of central banks globally plan to expand their gold holdings in the next 12 months. Factors related to the economic environment such as negative interest rates were overwhelming drivers of these planned purchases. This was supported by gold’s role as a safe haven in times of crisis, as well as its lack of default risk.

Paul Singer, founder and president of Elliott Management Corp says it best in a recent comment:

“This is a perfect environment for gold to take centre stage”. Fanatical debasement of money by all of the world’s central banks, super-low interest rates and gold mine operation and extraction issues (to a large extent related to the pandemic) should create a fertile ground for this most basic of all money and stores of value to reach its fair value, which we believe is literally multiples of its current price. In recent months, gold has gone up in price to some degree, but we think that it is one of the most undervalued investible assets existing today.

Where is gold headed

Gold compensates for realised inflation It also responds to real rates that reflect the cost of money. Those two inputs help anchor the price. However, as experienced investors are only too aware, gold is a market traded asset and market-driven prices can deviate significantly from fundamentals, particularly in the short term. The point of fair value is not to trade-off, but to measure risk and reward.

If gold is trading at a discount, it is possible to lose money, but the fundamental risk/reward is in your favour over the longer term. The current gold premium is telling us that higher inflation is coming. The implications for asset classes are immense. Higher inflation implies a weaker dollar, which implies higher commodity prices and a surge in equities – especially emerging markets.  Inflation would make bonds unattractive and potentially drive down equity valuations in the developed world, making them more attractive. The last time we saw this was in the 1970s.

Whilst past performance is not indicative of future performance, those that thrived owned gold.

What does it mean for Australian Gold Equities?

AUD spot gold has performed remarkably well over the last few years, primarily due to points raised as well as a weakening local currency. This is turn has resulted in a remarkable opportunity for the gold bugs. The vast majority of gold stocks have been caught in the updraft, paving the way for outsized gains compared as mentioned to many other major asset classes. Fortunately, there are several ways in which to leverage this opportunity. Given our nation’s rich history not only in gold but in most major resource categories we are well placed to continue to capitalise on what has been a spectacular few years. Given the cost of capital and Australians ‘go get em’ attitude, every man and his dog have been crawling out of the woodwork pick in hand to join what is fast becoming the new ‘gold rush’. Explorers and producers large and small have enjoyed favourable capital markets with abundant access to all forms of liquidity whether it be lines of credit or private money through placements.

Given the international and domestic landscape, all indications are that the status quo will remain. Thus, it is expected that the industry will continue to experience increased exploration and consolidation. Given all points raised the future looks bright for gold and we continue to search for opportunities not only in producers but in micro-cap explorers where we have been very successful over recent years. Providing Australia maintains its advantage from a currency perceptive and US spot gold remains steady, it is our belief that the path is indeed paved with gold for Australian gold stocks.

This document is a private communication to clients and is not intended for public circulation or for the use of any third party, without the prior approval of Baker Young Limited. In the USA and UK this research is only for institutional investors. It is not for release, publication or distribution in whole or in part to any persons in the specified countries.

This is general investment advice only and does not constitute personal advice to any person. Because this document has been prepared without consideration of any specific client’s financial situation, particular needs and investment objectives (‘relevant personal circumstances’), the investment adviser who has provided you with this report should be made aware of your relevant personal circumstances and consulted before any investment decision is made on the basis of this document.

Those acting upon information and recommendations contained within this report without contacting one of our investment advisers do so entirely at their own risk.

Baker Young Limited, its employees, consultants and its associates within the meaning of Chapter 7 of the Corporations Law may receive commissions, underwriting and management fees from transactions involving securities referred to in this document (which its representatives may directly share) and may from time to time hold interests in the securities referred to in this document.

Each research analyst primarily responsible for the content of this research report, in whole or in part, certifies that with respect to each security or issuer that the analyst covered in this report: all of the views expressed accurately reflect his or her personal views about those securities or issuers and were prepared in an independent manner.